Hamsa hand is a very famous and striking symbol that is used in many countries for the past thousand years. You can see it in jewelry and art. And it takes on many meanings across cultures. And you not going to believe how powerful it might be…

Are you interested in a particular about Hamsa? Then use the table of contents below to jump to the most relevant section. And you can always go back by clicking on the black arrow in the right bottom corner of the page. Also, please note that some of the links in this article may be affiliate links. For more details, check the Disclosure section at the bottom of the page.

The Hamsa hand is an amulet from ancient Middle Eastern and North African tradition, first appeared in ancient Carthage (present-day Tunisia) and Mesopotamia (present-day Iraq).  It also is known as one of the oldest symbols with a history that begins at least 1800 years ago.

It is recognized as a symbol of protection in every faith. It is carried like a talisman for evil eye protection and attracting health, fertility, fortune, wealth, and abundance to the owner.

People wear this amulet when they have trust in the Supreme Power no matter what is their preferred religious faith.

The first Hamsa amulet was formed like a hand. It has three fingers in the middle and also pinky and the thumb in a curved shape on both sides of the palm. It then moved to Egypt. And its shape changed – it became a two-fingered hand, each finger represented gods –  Osiris and Isis.

Over the years, Hamsa hand symbol spread to different regions and matured into an integral part of several faiths, mainly Islam, Judaism, Buddhism, and Christianity.

Hamsa meaning varies across different religions and countries. It is also referred to as “hamesh”, “chamsa”, “hamsa” and “khamsa”. The symbol even predates the Christian, Muslim and Jewish faiths.

In ancient Middle Eastern culture, it is found in amulets that stand for the “Hand of God”, and it is used for protection. It is referred to as “khamesh” in Arabic. In Arabic hamsa meaning comes from the five fingers of the hand.

Buddhism embraced this symbol as well and views it one of the Buddha’s Mudra. And indeed it looks a bit like “Abhaya”. Translated from Sanskrit as “fearlessness.” The abhaya mudra is made with the open palm of the right hand extending outwards at the chest level or slightly higher.

If you look at this Buddha hand gesture, or mudra, you will also feel the energy of protection, peace and a sense of strong, deep inner security. Hamsa in Buddhism, just like in Hinduism, related to chakras.

For Hindus just like for Buddhists, the hamsa represents the chakras, the five senses and their associated mudras (hand gestures) that re-direct energy flow throughout the body:

Hamsa Hand in Judaism: What is the hand of Miriam?

In Jewish culture, it also spelled as hamesh or khamsa and known as the Hand of Miriam. Its five fingers always tell the wearer to honor the God utilizing all the five senses. In Judaism, it is worn as jewelry and also used as decorations in houses. Hamsa was supposed to be representative of God’s hand stretching downwards to help mankind. 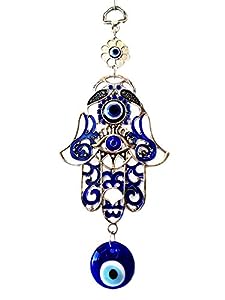 In Islam, they call it Hand of Fatima, meaning Muhammad’s daughter. It symbolizes divine protection. In Arabic “hamsa”  means five. And that represents the five pillars of Islam.

In Christianity, Hamsa was known by the name of the Hand of Mother Mary. And in this religion, it signifies fertility and blessing.

However, it’s important to point out that it’s not a religious or sacred symbol, as many might think. Instead, it’s more of good luck charm. The use of it to ward off evil comes from ancient times. It supposedly was originated somewhere in the Middle East, displayed by people of various faiths.

And getting back to Christianity… If some might still have hesitation about Hamsa: nothing a person might wear is offensive to God. Unless the potentially questionable item is worn with ill intent.

Should Hamsa be up or down?

The Hamsa symbol has two main styles. One style is shaped like a regular hand. The second one has two identical thumbs, and this is more popular. If you wear a Hamsa hand, you can wear it facing up or down.

Regardless of how it’s worn, many believe that the symbol gives success, harmony, and protection to the bearer. It is a guard against the “Ayin Ha’ra” or “The Evil Eye”. The evil eye is believed to be the sum of destructive energies that come from our negative emotions.

Hamsa with the eye: what does it represent?

Sometimes you can find hamsa hand with eye symbol: curiously cast palm with an eye in the middle. This specific type of hamsa acts as a shield from the evil eye. Seldom the Hamsa hand is painted with fish figures. Those are used to bring luck. They are resistant to the negative energies of the “Ayin Ha’ra,” mentioned above.

Unintentional damage, careless behavior or no-filter speech from people who surround you may be a cause of lots of pain in your life.

That’s why many wear the evil eye talisman even when at home.
It is a truth that many people won’t be genuinely happy for you when are celebrating your triumph.

I am sure you can recall the situation when you’ve received those unfriendly glances now and then, and I am sure you thought little of it, as we usually tend to. Somebody may badmouth while chatting with your boss.

They may keep information that could help you for themselves. Envious people will easily rob you of your success with just one bad thought. Sometimes even with no evil masterplan in mind of that nasty thinker.

Here’s what Hamsa hand might bring into your life?

The yoga hand symbol is often worn as a pendant on a necklace. Nowadays, this symbol can be found on key chains, home decorations, and other jewelry. It’s not just a fine piece of art. The symbol is highly regarded by various cultures.

It can be a great protector or just an empowering reminder to oneself. Whatever resonates better with owner personality and goals in the given period of one’s life.

However, one thing is for certain – if hamsa was adopted by so many religions, the symbol IS indeed very powerful. So it might make sense to adopt it as an amulet and keep it close at all times.

For instance, this gorgeous hamsa necklace made of a genuine tiger’s eye might work as a powerful protector. It doesn’t cost much but it looks exquisite. You can wear it both as a necklace or a bracelet or just hang it somewhere around your house for better luck and harmony.

How can you potentially benefit from wearing Hamsa hand?

Hamsa hand is a powerful symbol, and it brings many good things to you when you wear it. The symbol gives direct access to positive forces and helps you achieve a higher state of consciousness. It aids us in having positive qualities and brings deeper meaning and insight. Apart from its powerful meanings, it’s a beautiful work of art.